Be moved. Be changed. Love because you are loved.

How the Journey Resolves in the End.

“The journey always resolves in the end,” Tessa Afshar, author of Pearl in the Sand and Thief of Corinth, announced in her Mediterranean-English accent as I sat in her class absorbing. She stands around five-foot-tall, but don’t be fooled by her small stature. She is a giant woman of God.

Exactly a week ago, I would have doubted her statement.

My husband had left his wallet at home. Usually, it wouldn’t have been a big deal, but we were standing in the airport and had ridden in an hour and a half of traffic to get there. Our flight left in forty minutes. We pleaded with the TSA agent and were able to come up with a couple items with my husband’s name on them, my dental insurance card in which he’s the primary cardholder and a magazine with his name and address on the back. John received the pat-down of his life and is now on an intimate basis with Logan airport security, but they allowed him on the plane. We contacted a close friend who then overnighted his wallet to the hotel.

That is where our woes should have ended, but three hours later and almost 1000 miles from home, we arrived at the hotel. We carted our bags to the front desk, ready to crash after our early morning start. I was looking forward to taking a power nap before the first session of the work conference.

The hotel clerk tapped her fingernails on the keyboard. She paused and peered up at us with a hint of concern, “Didn’t Expedia contact you?”

“About what?” my husband’s brows collided in a V.

“There’s been an error.”

We both leaned in. “What sort of error?”

“Your room has been double-booked. Expedia was supposed to contact you and arrange another hotel.”

My husband and I stiffened. This was the first we heard about any of this. We checked our phones and had no messages.

“I’m sorry there’s nothing we can do for you.” Her smile hinted at sympathy. “You’ll have to call and make other hotel arrangements.”

The conference we were attending had brought over 700 entrepreneurs into the small city. There wasn’t going to be a hotel room available. Not only that, but John’s wallet was being overnighted to that specific hotel, and it wouldn’t be accepted if we weren’t guests. We didn’t have a place to sleep, and we didn’t know whether we could return home without his wallet.

Our journey didn’t look like it was going to have a resolution, certainly not a happy ending. I freaked-out. I asked to speak to a manager. I paced in the front lobby while making a few phone calls. I think I even shed a few tears. Meanwhile, my husband sat in their seating area and casually set up a portable office as if he worked there daily.

In stories, we have a character arc, which is usually where the dynamic hero is internally transformed over the course of events in the story. The journey makes them stronger, wiser, or more mature. In some way, they become different than how they started. We are all dynamic characters in the literary sense. God often uses these disasters to refine us into his image. I should have realized, as my husband did, that disasters, like being bumped from your hotel room, often end up as learning experiences (or at least a funny story I can blog about later).

Occasionally there is such a thing as a static character which in literary terms is a hero who doesn’t change (think of James Bond). The circumstances change around them, but they remain unmoved. The reason why my husband knew he didn’t need to panic was that we had a relationship with a static character. The static hero I’m referring to is Jesus. Jesus remains the same yesterday, today, and forever (Hebrew 13:8), and so does his love for us.

My husband (like Tessa Afshar) knew, with Jesus, the journey always resolves in the end. My panic, worry, and frantic calling was all a waste of energy. The circumstances may have changed, but God’s will doesn’t. We ended up getting a room in the same hotel we booked with a significant discount and received our happily-ever-after (not to mention blog material).

The Lord, your God, has blessed you in all the work of your hands. He has watched over your journey through this vast wilderness. These forty years the Lord your God has been with you, and you have not lacked anything.  – Deuteronomy 2:7

Ever try to assemble a trampoline? If you ever get the chance… well, don’t. It is not a fun experience. We purchased our trampoline through Amazon. They claimed to have a company who would come out and assemble it for us for a small fee. The problem is the company never came. After rescheduling multiple times and our boys staring at the unopened box promising hours of fun and jumping, we decided we’d assemble it ourselves. It even came with a how-to-video. How bad could it be? We’re fairly intelligent people. My husband can read building plans. We should be able to follow seven pages of instructions.

By midafternoon, springs rocketed into the air nearly missing us. We had the instruction video playing on repeat. By nightfall, each of us sported bruises, blisters, and dripped with sweat. It was a miracle we got the thing assembled. As I lay exhausted on the couch, I decided some things I was never meant to understand. The group, Go Fish (their tag line is music for kids that won’t drive parents crazy), has a song called, Planes, Phones, and Microwaves. They sing about the mysteries we don’t understand, but that we should thank God for the people who can – Amen to that.

Often, we think we deserve an explanation. God, why did I not get the promotion? I thought it was your will? Why can’t we have children of our own? Why would I have cancer? Sometimes, our intellectualism gets in the way. We think we can figure everything out on our own. We are okay using phones, computers, and the internet without fully understanding how they work, but when it comes to God, we demand answers before we can believe – before we can trust.

Here’s the thing: we’re not meant to have the answers.

1 Corinthians 13:12 says, “Now we see things imperfectly, like puzzling reflections in a mirror, but then we will see everything with perfect clarity. All that I know now is partial and incomplete, but then I will know everything completely, just as God now knows me completely.”

We are not supposed to have it all figured out. It’s God’s way of building our faith and strengthening our confidence in Him. Just as we the microwave to heat our lunch and the airplane to hold us in the air, we need to trust that God is in control. We will never have it all figured out, at least not this side of heaven. However, we can have peace because God, who knows us completely – our desires, wants, and needs – does have the answers.

And He is for us. 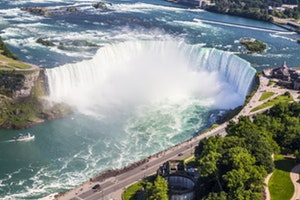 The Risk – To Trust or Not to Trust?

One hundred and ninety feet above a gorge of swirling turbulent water on a rope 1300 feet long and only two inches in diameter, Charles Blondin was the first person to cross Niagara Falls on a tightrope. In 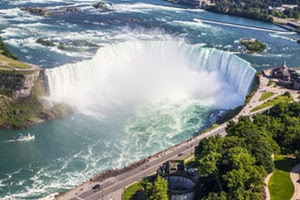 June of 1859, 25,000 people gathered to see him perform the feat or watch him plummet to a watery grave below. Not only did Blondin make the trip across and back, by 1896 he’d crossed over 300 times performing stunts like sitting on the rope and having a bottle of wine, strapping a Daguerreotype camera to his back and taking pictures of the crowd, crossing with his body shackled, and walking with a sack placed over his head. He even brought a stove upon which he cooked an omelet and lowered it by rope to the Maid of the Mist boat below.

In my opinion, the most trusting feat was on the part of his manager, Harry Colcord, who crossed Niagara on Blondin’s back. Blondin told Colcord, “Look up, Harry…. You are no longer Colcord, you are Blondin. Until I clear this place be a part of me, mind, body, and soul. If I sway, sway with me. Do not attempt to do any balancing yourself.” (Daredevil of Niagara Falls, Abbot, Smithsonianmag.com Oct. 18, 2018)

Trust is a powerful force.

Steve Covey in his book, The Speed of Trust, says if trust is removed it, “will destroy the most powerful government, the most successful business, the most thriving economy, the most influential leadership, the greatest friendship, the strongest character, [and] the deepest love.” (Soundview Executive Book Summaries, Speed of Trust, Vol. 28, No. 11, Part 1, November 2006)

Trusting someone is challenging. What if they let me down? Relinquishing control is hard. What if something I need doesn’t get done? We are an independent nation. We’d prefer to fix the problem ourselves. However, a lack of trust slows things down. It also keeps relationships superficial, measured, and distant. In order to reach a deeper level, in order to build trust, we have to take the first step and trust someone else. Steven Covey points out that trust “has the potential to create unparalleled success and prosperity in every dimension of life.”

It is even riskier not to trust.

Many of Blondin’s spectators believed he could make it across the gorge, yet only Colcord had the trust to climb onto Blondin’s back and cling to him knowing his life lay literally in the balance. He trusted Blondin enough to sway with him as the strong winds rocked the rope.

Life will have valleys and gorges. Who are you trusting to get you over them? Are you picking up a balancing stick and stepping onto the swaying rope yourself? Or, are you climbing onto God’s back and allowing Him to carry you over? Are you sacrificing trust to control the small, fleeting moments of your life, or are you trusting in the One who’s bigger than the gorge—the One who controls your ultimate destiny?

“Trust in the Lord with all your heart, and do not trust in your own understanding. Agree with Him in all your ways, and He will make your paths straight.” Proverbs 3:5-6

Check out my book trailer for Beacon Hill